Landscape for the People 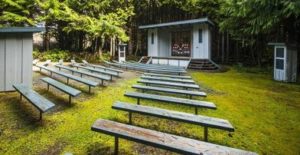 Landscape for the People

Grant was the First Official Photographer of the National Park Service

Authors Ren and Helen Davis showcase the work of George A. Grant, the first official NPS photographer. Although Grant’s work was seen by millions of people in park brochures, reports, newspapers and magazines, he was largely unknown. As the agency’s official photographer, his images were simply credited “National Park Service”.

“Images of national parks have always played an important role in telling the parks’ stories and inviting the public to visit,” said Rachel Spector, Acting Superintendent of Olympic National Park.  “This program promises to be both inspiring and enjoyable, full of iconic photographs from across the national park system.”

Ren and Helen Davis recently co-authored a book about Grant’s remarkable career with the NPS, which extended from the 1920s through the mid-1950s. Titled Landscapes for the People: George Alexander Grant, First Chief Photographer of the National Park Service, the book includes a biography of Grant and more than 170 of his black and white images. Many of these images, including photographs of Olympic National Park, will be shown during the program.

Copies of the book will also be available for sale and can be signed by the authors. The Kalaloch Campground Amphitheater is located within the Kalaloch area of Olympic National Park, at 157151 Highway 101, about 40 miles south of Forks. More information about the authors and their recent publications can be found at http://www.davisguides.com/.