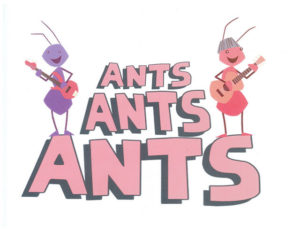 Ants Ants Ants is an Oregon-based family band with original songs that evoke vivid imagery of childhood at its best. Songwriters Johnny Clay and Dave Gulick give stylistic nods to 1970’s era Sesame Street, School House Rock, and “The Point” by Harry Nilsson, targeting not only the kids in our lives, but the kid in all of us. Ants Ants Ants’ debut and award-winning album, “Why Why Why,” was released in May 2018.
Johnny Clay and Dave Gulick, the songwriters, performers and producers of Ants Ants Ants, have played their parts in Portland’s independent music scene for at least the last decade. Clay was the lead singer of The Dimes, a nationally touring indie-folk group. Gulick wrote and performed with the Portland indie-pop band Derby. Both still perform occasionally, but more often are making a living licensing their songs for film, television and brands. Lately, the duo has thrown all of their energy into creating songs and other media for the Ants Ants Ants project