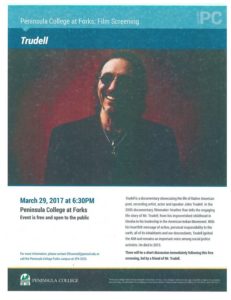 Trudell is a documentary showcasing the life of Native American
poet, recording artist, actor and speaker John Trudell. In the
2005 documentary, filmmaker Heather Rae tells the engaging
life story of Mr. Trudell, from his impoverished childhood in
Omaha to his leadership in the American Indian Movement. With
his heartfelt message of active, personal responsibility to the
earth, all of its inhabitants and our descendants, Trudell ignited
the AIM and remains an important voice among social justice
activists. He died in 2015.
There will be a short discussion immediately following this free
screening, led by a friend of Mr. Trudell.