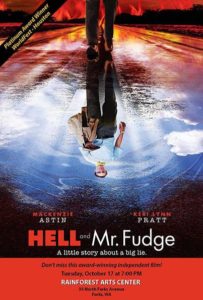 “Hell and Mr. Fudge” is slated for “an exclusive one-night engagement”
Rainforest Arts Center, in Forks

A platinum award winner at the 2012 Worldfest-Houston International Film Festival, “Hell and Mr. Fudge” is the warm, thoughtful, and sometimes humorous story of the trials and tribulations of evangelical scholar Edward Fudge. His groundbreaking work on hell and the hereafter has aroused fierce controversy. He’s either a hero or a heretic, depending on who you ask. Both friend and foe can appreciate the movie’s authentic revelation of his character.

Mackenzie Astin turns in an inspired and endearing performance as the inimitable Mr. Fudge. With a strong supporting cast, “Hell and Mr. Fudge” is as light-hearted as it is profound. Set in a 1970s Bible-belt town, it is based on Edward Fudge’s personal story of discovery, heartbreak and triumph.

The theme of hell has always been controversial – but perhaps never more so than now. According to a 2008 survey, nearly 60 percent of Americans think there is a hell where “sinners” suffer eternal torment. Theologians are increasingly divided over the issue. “Hell and Mr. Fudge” will raise new questions in the minds of ordinary people and contribute to the broader consideration of hell and the hereafter.