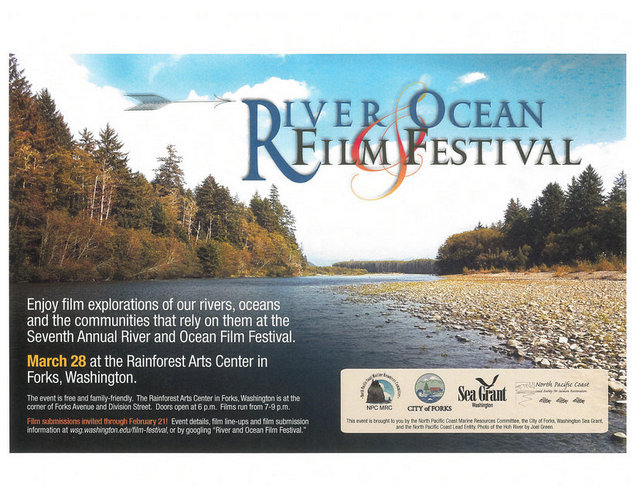 Join us on March 28, 2020 for the 7th Annual River & Ocean Film Festival held at the stunning Rainforest Arts Center in Forks, Washington, at the corner of Forks Avenue and Division Street.

The festival, held in conjunction with RainFest and the Washington Coast Clean-up and sponsored in part by Washington Sea Grant, offers film explorations of our rivers and oceans that highlight the beauty and opportunity of this region, as well as some of the issues faced by its marine and freshwater habitats and the human community.

Film Submissions Wanted!
Film submissions for the 2020 film festival, which will be held from 6-9pm on Saturday, March 28 in Forks, Washington, are now being accepted. Films must be less than 20 minutes long, and relevant to the natural or social dimensions of the West End of the Olympic Peninsula. To submit a film, please contact Ian Miller at immiller@uw.edu or by phone at 360.417.6460. Film submissions are due by 21 February 2020.