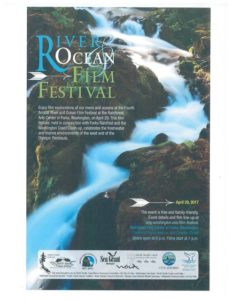 Enjoy film explorations of our rivers and oceans at the Fourth Annual River & Ocean Film Festival at the Rainfores Arts Center.  This event, held in conjunction with the RainFest River & Ocean Fair and the Washington Coast Clean-up, celebrates the freshwater and marine environments of the west end of the Olympic Peninsula.

Short films from the Olympic Peninsula and beyond will highlight the beauty and opportunity of this region, as well as some of the issues faced by its marine and freshwater habitats and the human community.  The event is free and open to all. The selected films are primarily shot in a documentary style and are family-friendly.

Event details and film line-up at: